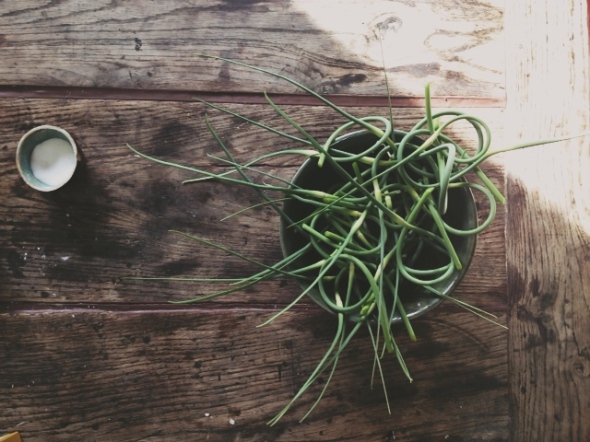 Ah Montreal. Likely the only city that could seduce me to enjoy watching auto racing. It surprised me how I enjoyed watching the cars move around the circuit. It intrigued me, the whole circus aspect. Instead of acrobats, tigers and elephants, I watched, and began to understand, well, perhaps appreciate is a better word, the 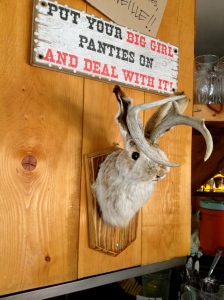 This was on the wall at one of the restaurants we went to. The french translation was written on cardboard and thumb tacked above it. Good message for me.

coordination of so many disparate elements – earth, wind, metal and fire – engineered into complex machinery. I was fascinated thousands of people gathered to watch which car would claim the trophy, who would become the ringmaster for mastering the ring. The entire spectacle was tooled and honed into a show of money and mechanical power. [wife edits: in that order].

The gearhead was in his element. As we walked toward the track, moving as one wave among an ocean of people on the first day [wife edits: It’s a three-day event. Yes, I attended all three], the air vibrated with the thunderous noise unique to F1 engines. The gearhead turned to me, a good head taller than most of the crowd, with a dazzling smile and laughing said, “I’ve got goosebumps!” He flashed me his arm as proof. Il avait la chair de poule. [wife edits: It sounds so much better in French]. Il avait une érection tout le corps. [wife edits: exactly]. 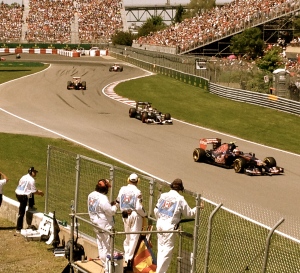 I wore earplugs as was so thoughtfully suggested by sympathetic listeners when I informed them the gearhead and I were attending the Montreal Grand Prix. I also wore sunscreen, a big floppy hat, and a scarf across my shoulders as protection against the damaging rays of the sun and it’s relentless heat that beat down on the aluminum stands stuffed with people. A breath of air, once in a while, failed to extinguish the heat. You would easily have picked me out of the crowd of thousands as I was, quite literally, overdressed for the occasion. The gearhead put it most eloquently, he had never seen so many tattoos [gearhead edits: of Ferrari emblems]. Also, I wasn’t sporting the requisite accessories: a beer can and a cigarette. No matter. The smells of smoke and sweat swirled and mingled with the iridescent scent of fuel and the disintegration of rubber tires. I looked over at the gearhead. He’d cracked a beer and held the can like a talisman in his hand. I think it was 9:30 a.m.

We had excellent seats facing the hairpin turn. The cars appeared at our left with a frighteningly fast approach, decelerated with a roar to an almost-stop in order to negotiate the turn, and then followed a dizzying acceleration through the gears to come out of it into the straightaway that swept away to the right of our stands. What amazed me most was the concentration of all those people and the absolute silence that accompanied it through the race. No, that’s not quite right. What amazed me most was that the gearhead sat still for a good part of three days.

Anyway, I enjoyed myself. Montreal is a wonderful city and we walked everywhere, sampling different food and wine [wife edits: and craft beers, and lime margaritas rimmed with rock salt] as we went. I learned a lot about racing cars. It was interesting. It reinforced the lesson that one should always take the opportunity to expand one’s knowledge [wife edits: even when one disagrees with the excessive burning of fossil fuels] [gearhead edits: groan]. 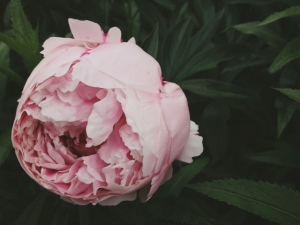 This is not a garlic scape – it’s a peony – but it was too beautiful not to share on this post.

Expanding one’s palate is also important [wife edits: warning…poorly executed segue…oh, too late].   You may not have eaten garlic scapes unless you grow garlic in your garden. We do. Garlic scapes are the graceful swan-necked bent flower bud stems of garlic. To force the plant’s energy into plumping the garlic bulbs beneath the soil, the scapes must be trimmed away early in the growing season. Now. Usually I miss the opportunity to harvest these before they become too tough [wife edits: through laziness]. This year though, I managed to get at them before they became stringy and inedible. They are best steamed till bright green, or blanched in salted water. They have the texture of a

This is a garlic scape.

fresh green bean, perhaps with a little more bite, and a very mild garlic flavour. They’re great with Asian flavours of garlic and soy and could easily be added to stir frys. Many people pickle them. The harvest the other day was blanched and shocked in ice water and then added to a salade composée. This took advantage of some the bumper crop of lettuces after all the rain we’ve had too, although we didn’t make much of a dent. Like a salade Niçoise, I added chilled hard-boiled egg, chilled potatoes, olives and very good tuna packed in oil that I keep for just such occasions. Sprinkle a simple vinaigrette over the top before eating and voilà, delicious. 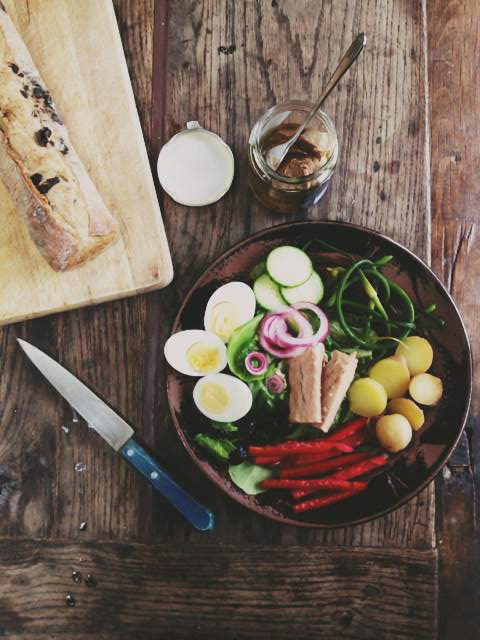 19 Jun This entry was published on June 19, 2014 at 6:46 am. It’s filed under Salad, Spring, Summer and tagged F1 car, garlic scapes, gearhead, grand prix, Montreal, scapes. Bookmark the permalink. Follow any comments here with the RSS feed for this post.

Older: All I Owe Myself: Asparagus & a Roadtrip
Newer: Friend of Fear