This is a dish that I crave year round but it can’t be replicated with store-bought produce during the depths of winter – I’ve tried with disappointing results.  It’s addictive flavour (and texture) combination depends on garden fresh ingredients that have been allowed to linger and ripen under a hot summer sun for as long as possible; it’s almost as if you can taste the transformation of light into matter.  Most people, I suppose, would balk at my enthusiasm for the eggplant (or aubergine).  It has been celebrated with mixed enthusiasm  on North American palates and plates.  Even here at home, this dish garners strange looks from the gearhead, but he promptly piles his plate with the stuff.  Not so with the kids who don’t try to hide their obvious revulsion.

Aubergines – I’ll use the terms interchangeably, as so many in Canada tend to do anyway – came to North America via past president Thomas Jefferson (1743-1826). It must have been a strange addition to Virginian gardens at the time, not to mention dishes, especially as it hadn’t been considered “an edible” for centuries.  The Italian word for the fruit, melanzana,  or mad apple,  retains the warning folk lore perpetuated: eating the fruit would cause one to go insane.  This because of the plants’ relation to deadly nightshades (like tomatoes and potatoes).

This past weekend I was a stranger in a strange land, but unlike an eggplant [wife edits: my gawd this is stretching creative leeway – I’m comparing myself to a bloody eggplant?!  What kind of segue is this?  Obviously I’m too tired to write anything comprehensible but damn it I committed to a post a week so if you’re reading, stay with me.] Unlike aubergines finding their original North American home in the rich soil of Virginia, I found myself in a desperately depressing waste land of metal in various states of decomposition.  In fact, it’s the place where cars go to die, the auto wrecker yard. No, of course I didn’t go there willingly, I went to help the gearhead look for his lost glasses.  I suspect from the casual way he greeted the man at the front gate, that the gearhead frequents the area regularly. As I stood among the steel skeletons, on dirt that doesn’t even support a weed, I wondered how we might possibly find the gearhead’s lost glasses in such a mess.   I had this eerie feeling about the place, like I was in the film Mad Max.  I happened 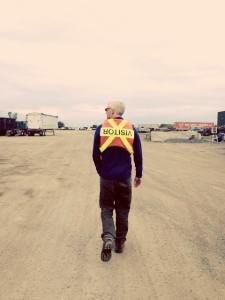 to catch this pic of the gearhead.  The surrealness of the place made me wonder if he was sending a message to aliens watching us from above [wife edits: I need to go to bed].  How else could I explain how he walked directly to an indistinct twist of metal, leaned his long body through a smashed windshield, and triumphantly plucked his glasses from the dark interior of what was once a car?  Yes, of course he remembered where he had been the day before, and where he might have misplaced them, but how the hell did he pick that one car out of thousands to find the missing piece of automobile he was looking for?!  I just don’t understand.  Like the eggplant, a misunderstood and undervalued fruit [wife edits: that’s not a good analogy but too late, it’s in and I hate using white out].

This addictive dish doesn’t look beautiful when it’s finished.  Eggplants tend to cook down to a cement grey mush.  The addition of the basil injects some bright

green but most would agree this is just window dressing.  Instead, if serving this to guests, break out one of your more interesting or beautiful plates that might detract from the ugliness of the contents.  It does amaze me how people must be persuaded to try this  dish;  initially it is strongly rejected on the basis of its unappetizing colour

(and promise of mushy texture).  Once people are persuaded to taste it, the contents of the dish disappear very quickly.  If there are leftovers (and usually I have to hide these away to save as such), I roll the caramelised eggplant in a whole wheat pita along with some hummus and crumbled feta cheese – it makes an absolutely delightful (if extra garlicky) adult lunch (and no my kids won’t touch this with  a ten foot pole – the texture is not to their liking).  Thanks for hanging in to the end here.

removed and sliced into 1 cm/1/2 inch slices, (leave the skin on)

Heat the olive oil and eggplant slices in a cast iron pan or medium sauté pan over medium heat.  The eggplant will soak up the olive oil at this stage, but give everything a good stir to try and get the oil evenly coated over all the eggplant pieces.  The olive oil will start to release later on in the cooking process so don’t stress about this too much.  Cook for about 5 minutes, stirring every once in a while.  Be careful not to brown the eggplant; you may have to lower the heat to prevent this.  Add the garlic and chilli, salt and pepper, and give everything a good stir.  Turn the heat down to the minimum setting.  Cook for 45 minutes to an hour (as you would when caramelising onions), stirring once in a while.  Some of the eggplant will start to stick to the pan, but just scrape those bits up and stir into the mixture.  The eggplant will start to get mushy and the olive oil will be released.  It’s done when everything is quite mushy and the oil has released out of the fruit.  At this point you can turn off the heat and store in a container in the fridge until ready to serve (heat briefly before the next step). Just before serving, throw in the whole bunch of basil leaves – you should have as much as you can cram into the pan.  Stir gently just until the basil leaves start to wilt.  Remove from the heat and scrape the contents into a serving dish.  Don’t encourage people to eat too much of it because then you will have more for yourself [wife edits: ha!].

Video of this recipe. 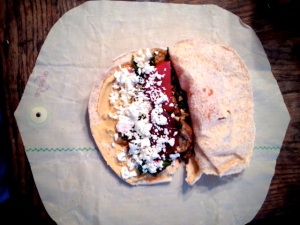 My very yummy lunch I took to work today. Yes, I added some beetroot too.

12 Sep This entry was published on September 12, 2013 at 11:56 am. It’s filed under Autumn, vegetarian and tagged Aubergine, Black pepper, Cook, Dish (food), Eggplant, Mad apple, Mad Max, Olive oil. Bookmark the permalink. Follow any comments here with the RSS feed for this post.

4 thoughts on “Mad Apples: strangers in a strange land”