Bourbon – It’s all in the timing with hearts and glass

An Old Fashioned is a manly cocktail – in the courage and strength way.  When it’s properly made (the drink is bastardized far too easily these days), it’s seductive fragrance of vanilla and orange beguiles those first tentative sips before the fiery heel of alcohol kicks the back of your throat.  The drink conjures sepia images of copper stills, back roads in Kentucky and commerce between criminals. The addition of sugar in this drink evolved to increase its palatability when, arriving as it did, like moonshine, at speakeasies during prohibition.  These days, it’s not so rough and the addition of anything sweet should be kept to a minimum!  No crushed sugar cubes please!  No tablespoons of maple syrup.  Let the bourbon sing with only a drop or two of sweet syrup.  No more.  Here’s the recipe I use

A couple dashes of Angostura bitters

2 ounces (60 ml) Bourbon (Maker’s Mark is a favourite but there are plenty of small batch Bourbons to experiment with – key word here is small batch.  Some people like rye whiskey (note: not Canadian whisky). I’m not one of them.)

Use a short glass with straight (ish is ok) sides and a heavy bottom, referred to as an old fashioned glass, not surprisingly.  Add the sugar syrup and the bitters to the glass.  Twist the orange peel upon itself before adding to the glass – this bruises the peel and releases the oils that will flavour the drink. You may want to use the handle of a wooden spoon to muddle the peel with the syrup and bitters before adding the bourbon to the glass.  Add the bourbon and a few ice cubes, stir and enjoy.  Mmmmm, now we get to the task at hand.

There are advantages to being married to a gearhead.  The oil in my car is always changed; my tires are rotated to correspond with the seasons; and the tire

pressure is checked and filled for “optimal fuel efficiency”.  When something breaks, it gets fixed (albeit by voiding any warranty we may have had).  Most recently it was the vacuum cleaner.  Before that it was the washing machine.  Said motors are dismantled (in the hallway or the kitchen where they died) and left in a million tiny pieces. After a time [wife edits: don’t ask how long], they’re put back together again with precision that a watchmaker would envy [wife edits: are watches obsolete? Ergo, are watchmakers?].

It’s remarkable really.  I couldn’t assemble the ingredients for a cake without following a recipe, and I think there are less than 10 ingredients.  Okay, I could assemble them, but the cake wouldn’t turn out.  I couldn’t hit an on switch to hear the growl of a working motor and know “success” after baking a simple ordinary vanilla cake.

So you know after that lead in paragraph we’re headed into opposite territory, don’t you, dear reader?  The territory where there are disadvantages?  I’ll limit my recount to this last weekend’s task: re-assembling a glass greenhouse.   The 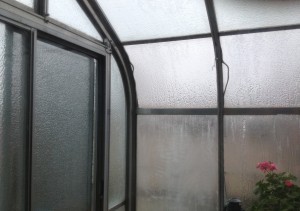 gearhead took apart the thirty-year-old greenhouse at the beginning of the summer.  The ice storm in ‘98 destroyed the seals between the double panes, allowing water, condensation, and eventually green mould, to cloud the space between.  He disassembled the greenhouse and then he phoned around for quotes to get it fixed.  When we learned that the curved glass pieces would cost 1100 per pane (not to replace, to fix) (there are six of them), well, the gearhead decided his time as a glass expert had arrived.  Over the next few months, each curved pane of glass was taken apart, cleaned and reassembled.  We ate the cost on the straight glass pieces.

The death scene played itself over and over in my mind.  It wasn’t funny at all.  I would like to say the completion of the reassembly was cause for celebration.  That I whipped up a few Old Fashioned cocktails to speed the experience into the foggy caverns of memory. In truth, I was exhausted.  We all were.  I went to bed before the kids and dreamt about copper swirls and moonbeams.

Maybe next time I have to put a greenhouse back together [wife edits: never], I’ll remember to have this delicious cocktail afterwards instead of the night before.

08 Nov This entry was published on November 8, 2013 at 7:11 am. It’s filed under Libations and tagged Angostura bitters, Bourbon, drink, gearhead, Kentucky, Old Fashioned, Old Fashioned glass, Sugar. Bookmark the permalink. Follow any comments here with the RSS feed for this post.