“Why don’t you make normal jams, like strawberry? Why does it always have to be some weird hybrid?

“I missed strawberries this year” I guess he didn’t read that post.

It was too early for any sort of conversation and I was still smarting. The jars of newly made jam, left to cool overnight, were barring the gearhead’s way from making coffee. It made him irritable. I didn’t press my philosophy: jam is an opportunity to create flavours that exceed those of the fruit itself. The gearhead doesn’t eat much jam; when he does, it’s marmalade. I stopped making marmalade seven years ago. [wife edits: it’s too early to explain this, but I think you get it].

Some time around 4 am, on his return trip from the loo, the gearhead “dropped” a pillow he’d picked up from the floor. It landed squarely on my stomach with a force far exceeding gravity.

“What are you doing?!” [wife edits: there may have been some expletives]

“Sorry! I didn’t mean to wake you up!” [wife edits: was that a smirk in the dark? Had I imagined him raising the pillow high and whipping it down onto his sleeping wife?]

This set the day’s stage.

What does a gearhead eat for breakfast? He skips it often, although, he loves eggs over easy, with bacon and potatoes. I didn’t think he indulged regularly but my suspicion rose when the diner waitress greeted him by name.

In times BC [wife edits: Before Children, and yes, it feels as long ago as that], the gearhead used to combine yogurt, granola and fresh fruit for the two of us. We would sit eating together, peaceful and silent, the coffee hitting our veins as the sun rounded the horizon. The memory brings tears to my eyes.

In times BC, we lived in a ski town. Breakfast was essential to sustain a day of

skiing. If you’re wondering, the gearhead was still a gearhead back then, but instead of cars – [gearhead edits: there were still cars. What about that Camero I picked your sister up in, from the airport, that didn’t have any interior seats? She got that migraine for three days, poisoned from the gas fumes that came through the holes in the floor?][wife edits: oh yes. I remember.] – instead of cars it was skis; and telescopic poles; snow reading tools; wax for a variety of temperatures; edge sharpening stones; riser plates; camp stoves; the list was endless. Our differing ski abilities meant we rarely skied together. If we had, we’d be divorced.

It was a while before I discovered his ski routine included bacon. There’s a secret cave on the mountain. You have to ride hair-raising angles to reach it. I only went there after huge, powdery, pillow soft, snowfalls. For obvious reasons. But the gearhead, armed with the camp stove and a frying pan, downed a pound of bacon there with heart clogging regularity. The cave walls smelled like bacon. Being offered a mostly cooked strip from a communal fork while “I’m going to die” adrenalin is coursing through your body is an experience I tell you.

But this paragraph’s getting long in the tooth, what was my point? I’m still too tired to piece it together. ..snow…pillow…oh yes, the ski town. The gearhead and I were at some swank event one evening when he spotted a former Olympian skier. I only know this because he whispered, far too loudly, “that’s Steve Podborski!!”

Before I had the presence of mind to grab him, the gearhead strode over to the skier’s circle, identified his mother, and with all seriousness asked her what she had fed her son for breakfast.

“Oatmeal!” She smiled proudly. I dragged the gearhead away.

For the rest of our time living in the ski town, the gearhead ate oatmeal every morning. 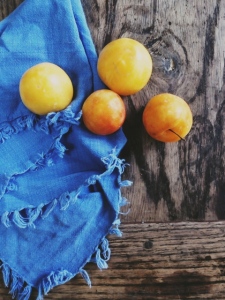 But I like jam. I like it on toast in the morning. If I’m feeling particularly indulgent [wife edits: frequently], I’ll spread a layer of good ricotta first and top it with jam.

The yellow plums are in season now, but I couldn’t help picking up the box of guava. I wanted to capture their exotic perfume somehow. It reminds me of my sister who lives in Mexico and who breakfasts on the fruits regularly. My sister, who endured the metal no-seat, in a speeding Camaro. I promise next time I’ll send a pillow.

I won’t include the recipe here because I’m still working out the proportions and method, but I’m pleased to report the jam set.   Basically it’s equal proportions of yellow plums, guava and sugar, cooked till softened, run through a mouli to get rid of the guava seeds, and cooked up again till set.

[gearhead edits: don’t write about that! I told you, I just picked up the pillow and placed it on the bed. You’re completely exaggerating the whole thing.]

[wife edits: so, who’s the asshole now? And yes, this was a nod to Vonnegut – the childishness bit]. 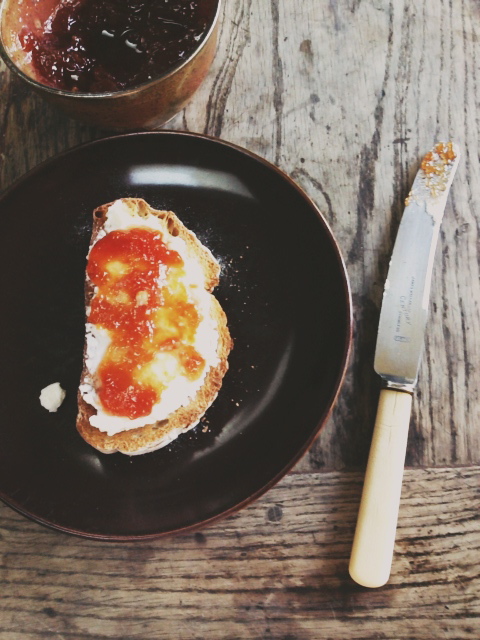 19 Aug This entry was published on August 19, 2014 at 7:30 am. It’s filed under Morning Foods, Preserves, Summer and tagged bacon, guava, plum, steve podborski, vonnegut. Bookmark the permalink. Follow any comments here with the RSS feed for this post.