What to cook an Ambassador

Europe is f%*king expensive. [wife edits: in case you missed it, that’s percent star expensive – sub in whatever beautiful artifact you’ve just been looking at and multiply it’s price by some blindingly bright, out of our atmosphere, percent exchange.]

Warning: this post is a long, histrionic one with a poorly scraped together recipe; I can’t guarantee your return on investment – it’s a bit of a departure from the regular running down of the Gearhead, but I think it’s still a good story. [Gearhead edits: you mean I get a break in this one?  I’m not the evil husband character you always exaggerate?!][wife edits: silence].

The Gearhead was prescient about the cost.  He insisted we stay with friends and family for most of our time in Europe.  And really, this worked out well.  It kept us all behaving.  Mostly. 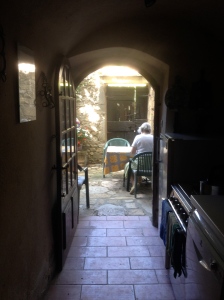 Arriving at one place though, our host (whom I was meeting for the first time) said,  “I hope you know you’re cooking dinner for us for the next week in exchange for your stay.”  I hadn’t even got out of the car yet.  Somehow my cooking reputation had arrived before we had.  I tried to catch the Gearhead’s eye [wife edits: with a red-beamed laser of death] but he was “busy” unloading our luggage.

After a somewhat paralyzing trip to the grocery store –  [wife edits: the cheese aisle alone was a wonder to marvel at and I didn’t know whether to laugh or cry, opting instead to stand there, catatonic.  The kids were ransacking the chocolate and crème caramel aisle, loading booty into our cart as the happiest of pirates.] – the cooking arrangement worked well.  After all, when you step outside the door of a villa in southern France, you realize the six foot hedge beside you is rosemary; that the pale blushed globes in yonder tree are pomegranates; that the sweetly smelling, dusky, purple figs, dripping from the tree across the driveway, are perfectly ripe; that the herbaceous wind is such because it blows its scent off the garrigue.  Everything was fresh and ripe and beautiful.  Cooking was easy.  Apply heat.  Or don’t. 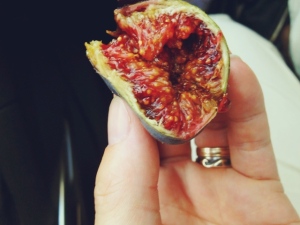 We switched houses and hosts a week later.  The Gearhead assured me we would have some autonomy – it was expected – we would cook for ourselves.  We were guests of the former ambassador of the Netherlands, now retired.  You know, the guy who represents his Queen in countries across the globe?  The guesthouse was well-equipped, surrounded as it was by a vast, manicured lawn and divided from the main house by a (ahem) concert hall.  [wife edits: that green lawn …such a blatant contrast in a region of heat and limestone.]

We did cook for ourselves, sharing a cocktail and little French cheese crackers with olives before our respective dinners.  I perfected a posh Canadian accent.

[Gearhead edits: wtf is that?!] But when we offered to take the couple out to dinner as a thank you, the former Ambassador insisted I make them dinner instead [wife edits: really, he was extremely persuasive.  There was no getting out of it.  I tried.  I think there may have been some tears even].   The Gearhead was impervious to my death ray eyes.  Panic set in. What was I supposed to cook for a man that had eaten a lifetime of dinners prepared by the greatest chefs across the globe?! 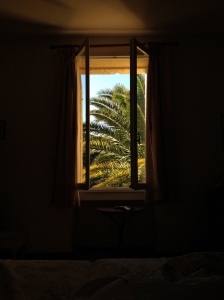 I bought duck breasts and a huge tub of crème fraiche and made my way to the wine shop with confidence.  I walked in and a woman rose from behind the counter like a phoenix.  I wilted. I struggled, using my grade one recollections of barnyard animals, to describe the dish to her.  Canard was not enough…what herbs would I be using?  A roast duck? Duck confit? I blushed, making vague circular references to my chest, having forgotten the word for “breast” in French [wife edits: Did I ever know it? Magrets de canard!]. She listened to me with the seriousness of a physician trying to piece together my symptoms. Finally, we settled on the wine.

There were green beans and carrot salad, potatoes roasted in duck fat with fresh rosemary and sour cherry preserves with brandy for the sauce. Half way through caramelizing onions, also for the sauce, I realized I had forgotten peaches to go with the crème fraiche for dessert.  We couldn’t just have cream could we? [wife edits: well I could; but an Ambassador?].  I scanned the kitchen for something, anything. There were quince from a tree outside but the Ambassador intercepted me as I reached for them, “you can’t eat those, they’re terrible!  I don’t like them.”  (He had been keeping a close eye on the proceedings.) What to do.  Now I felt the added pressure to create something that proved him wrong.  It was too late to go backwards. Besides, I love quince.

I put some sugar and water on the stove to boil, tossed in a handful of fresh lavender, hastily harvested from the bush outside the door, peeled the quince (with difficulty), placed them in a dish, poured the sugar syrup over the top, sealed the dish with tin foil, threw the lot in the oven and prayed.  [wife edits: I think the prayer part is important.  Especially for an agnostic theist.] An hour or so later I pulled them out and their colour had changed from pale yellow to rosy pink.  Served with the crème fraiche, the Ambassador was astounded his quince could be thus transformed.  They were delicious.  The dinner was lovely and the wine – the wine was divine.  I was lost to it’s echo of leather and lavender and that will forever be locked in my mind with accomplishment and contentment. 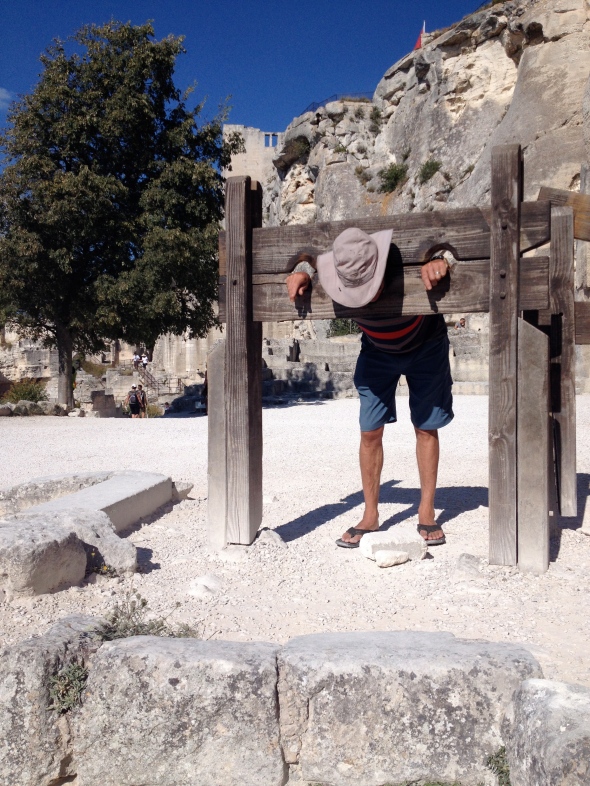 Brag about my cooking skills eh?

16 Oct This entry was published on October 16, 2014 at 6:07 am. It’s filed under Autumn, Sweets and tagged Cook, crème fraiche, France, garrigue, quince. Bookmark the permalink. Follow any comments here with the RSS feed for this post.

Older: White Knuckling it in France
Newer: In a Stew

12 thoughts on “What to cook an Ambassador”

Leave a Reply to Food by the Gearhead's Wife Cancel reply