I missed the strawberries this year. It’s the second year this has happened. Harvest days came and went and I spent those days dutifully at my desk at work, optimistic the berries would wait for me.   Strawberry jam is usually the first jam I make in the season. Rhubarb always catches me by surprise – I’m never prepared for it before the flower heads take over.   The last two years, no, three I guess, the season’s first jam just hasn’t worked out. One year I cooked it so long the result was a paste so thick you could barely slice it, let alone spread it, on toast.

The next year it didn’t set. Probably because it had been a wet spring and the berries were water logged. No wait – it was because I was completely distracted by 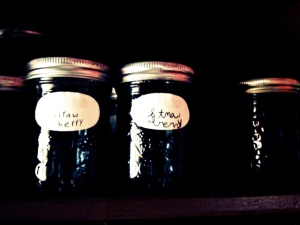 the gearhead’s accusation of adultery. Don’t raise your eyebrows like that! It’s a fairly regular accusation and not because I walk around in a short pink kimono flashing my legs and breasts at strangers who come to the door [wife edits: I don’t, but I love this image. Add a long black cigarette holder and subtract about 20 pounds]. It’s just part of the gearhead’s routine; the girls and I always roll our eyes when we hear it. [wife edits: where would I fit a second gearhead in? and no, that’s not a dreadful pun, you dirty minded wits out there].

But this time was different. I’d picked up a flat of strawberries that year at the farm gate, on my way home from work. When I got home, still in my heels and skirt, I noticed a tiny black dot on the inside of my thigh [wife edits: on the inside of my very upper thigh hmm?]. To my horror, holding the black dot close to my face after removal, I realized it had legs! Strawberries forgotten, I rushed to the gearhead in a complete panic – it was a tick and surely I’d be afflicted with Lyme’s disease! He looked down his nose and over the top of his glasses at the tiny insect I’d trapped in a glass jar and pronounced, with the authority of an entomologist, “that’s not a tick, that’s a crab. Who have you been having an affair with?”   My shriek of frustration rather alarmed the children. But I really started to worry when I dropped the insect off at the local health unit for testing. The woman there also looked down her nose and over the top of her glasses and slowly said she didn’t think it was a tick… The pregnant silence that followed filled me with guilt by association, or rather, suggestion. I was ready to melt into the floor if

she finished her sentence the same way the gearhead had. I wondered if it’s possible to catch crabs off public toilet seats. I suggested she just send it to the lab for a definitive test. Thankfully she obliged. Six months later the yellow lab sheet confirmed the black legged tick as positive for Borrelia [wife edits: the bacteria that causes Lyme’s disease]. I hadn’t had the thing attached for more than half an hour before I plucked it from my skin, so I needn’t have worried.

But of course I’d ruined the jam by that time. We poured it over pancakes and waffles. This year the elderberry flowers bloomed simultaneously (usually they’re staggered) and I had planned to combine them in a jam. But the harvest came and went and I missed it.   Goes to Eleven seemed pleased, saying she doesn’t like how the berry chunks hover within the gel, the way I make it. She likes things to be a uniform texture and the elderflower idea was beyond the pale. She’s thirteen though, so everything is like this.

I’ve come to realize, or perhaps accept, that life at the moment has become too busy for strawberry jam. What a melancholy thought. But there will be strawberry harvests in the future that I’ll catch. More upsetting will be the day when the gearhead stops accusing me of affairs, for surely it will signal the passage of too much time…tick, tick, tick.

21 Jul This entry was published on July 21, 2014 at 7:56 am. It’s filed under Summer and tagged affair, strawberry. Bookmark the permalink. Follow any comments here with the RSS feed for this post.

Leave a Reply to Food by the Gearhead's Wife Cancel reply